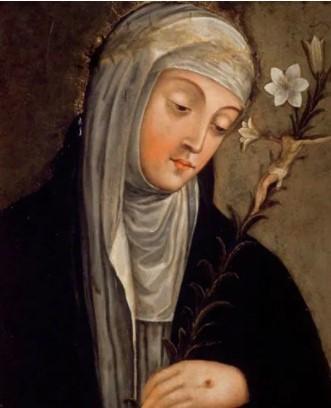 The patron saint of our Europe team is St Catherine of Siena.

Catherine was born in the Italian city of Siena in 1347. She was the youngest child in a very large family, they lived a comfortable life; her father was a successful wool-dyer.  As a small child, she was very noisy but when she became a teenager, she would spend hours quietly in her room, happy to read and say her prayers. She developed a habit of giving things away, continually giving away her family’s food and clothing to people in need.  She was very strong willed. Her family could not understand why she did not like to go to parties, did not want to get married or even become a nun. Her family called her ‘difficult’.

Eventually, she chose to belong to the Third Order of St Dominic. This meant that she could wear the black and white clothes of Dominican nuns and follow part of their Rule, but she could stay at home rather than joining a convent.

Catherine spent hours praying and thinking about the life of Jesus. Sometimes, she was not even aware of anyone near her when she was saying her prayers. When she was 21, she had a vision and was told to go out and help the poor and the sick. She had a remarkable ability to give helpful advice to people and they soon started to follow her and support her in her work. Catherine started to travel and was teaching people to confess their sins and love God. She became involved in politics, calling for peace. Catherine received the stigmata when praying in front of a crucifix.

Why Is St Catherine of Siena an inspiration to us?

Catherine gave up her life and devoted herself to God and helping others. She worked for peace, established a monastery for women and wrote many influential letters and prayers. Because of this, she was made a Doctor of the Church.

She is the patron saint of fire, nurses and one of the patrons of Europe.