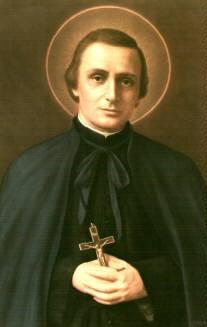 The patron saint of our Australia team is St Peter Chanel.

Peter was born on 12th July, 1803 in France, he was the fifth of eight children. As a young boy, he worked as a shepherd. The local parish priest recognised that he was intelligent and a good person and so he persuaded Peter’s parents to allow him to attend a small school he had started. Because of this, his local priest made sure that he had a good education. When he joined the seminary, where he trained to become a priest, he was well liked by the other students and his teachers.

After his ordination he found himself in a rundown parish but in the three years that he was there, he completely revitalized it. Peter was inspired by the writings of some of the letters that the missionaries in America had sent back to France. He really wanted to become a missionary himself and so, in 1831, he joined the Society of Mary which carried out missionary work at home and abroad. Even though he wanted to travel the world to spread the Good News to everyone, he was appointed to teach at a seminary in France and this meant he had to stay there for the next five years, training young men to become priests.

In 1836, the Society of Mary decided they would spread the Gospel in a place called the New Hebrides in the Pacific Ocean. Peter was appointed the Superior of a small group of missionaries sent to share their faith there. It took 10 months to travel there and when they arrived he went to the Island of Futuna with one of the other brothers. At first, they were welcomed by the people and the King but the King soon became jealous when the missionaries learned the language and gained the people's confidence. The king soon realized that if they became Christians, they would have to change their way of life; he was not pleased.

When the king’s son said that he wanted to be baptized as a Christian, the king became very angry and he sent a group of warriors to attack the missionaries.  On April 28, 1841, three years after his arrival, Peter was taken prisoner and beaten to death by those he had come to save.

Within two years after his death, the whole island became Catholic and has remained so. Peter was canonized by Pope Pius XII in 1954.

Why is St Peter Chanel an inspiration to us?

Peter Chanel is the first martyr of Oceania and is the patron of Australia Oceania.