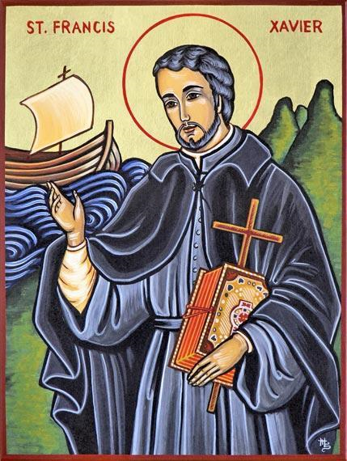 The patron saint of our Asia team is St Francis Xavier.

Francis was born in 1506 in Spain. He came from a rich family and he studied in Paris. This was where he met Ignatius of Loyola. This meeting changed his life. Francis  and five of his friends joined Ignatius and their small group dedicated their lives to God. Together they formed a group called the Jesuit order of priests.

In the 16th century, the Catholic Church believed that unbaptised people would not go to heaven. This thought horrified Francis and so he volunteered to go to unknown parts of the world to convert ‘pagans’ to the Christian faith.

Francis and two friends headed east and after 13 months, they reached Goa in India. He stayed there for 7 years, living life as the poor did, only eating rice and water, sleeping on the ground in discomfort.

Francis continued his mission in Japan where he was entertained by rich merchants and noblemen. He learnt some Japanese and was able to communicate well with the people there. He was impressed by the honesty, love of learning, politeness and sense of honour of the Japanese people. Instead of wiping out pagan attitudes, he began to teach about Jesus by building on the virtues the people already had.

After 2 years, Francis wanted to reach China. He was trying to arrange to be smuggled into the mainland because China did not welcome foreigners. However, whilst waiting for a boat to take him there, he caught a fever and died. He was only 46 years old. Francis was buried in Goa, which has kept the Catholic faith he planted there until today.

Why Is St Francis Xavier  an inspiration to us?

Francis wanted to tell people about Jesus. He was determined to travel across the world to spread the Good News. In Japan, he recognised the goodness of the people there and this, alongside his enthusiasm and willingness to suffer, helped him to be successful in his missionary work.

Francis Xavier is the patron saint of many Asian countries and of missionaries.