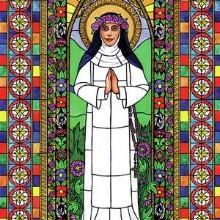 Born in 1586, her parents named her Isabel but she was always known as Rose. Her parents were Spanish but living in Lima, the capital city of Peru, in South America. Fifty years before she was born Spanish explorers took control of Peru; they treated the local people badly, taking their land and most precious objects and belongings. By the time Rose was born, Lima was under Spanish rule and the local Peruvian people were treated like slaves.

When Rose’s family fell on hard times, she worked to help them. She grew flowers to sell, and learnt how to sew clothes and embroider tablecloths. She tried to do what her parents wanted and she loved to help them, but she did not want to get married.

Rose’s parents were hard working and serious about their religious faith. They were rather surprised to find that their daughter was even more serious about it. She chose St Catherine of Siena as a spiritual mentor and, like her, joined the third order of St Dominic. This meant that she could stay at home rather than join a convent of nuns but she was attached to a religious order. Her friends and her family were not happy because she was so strict with herself, fasting and undertaking severe penances. She chose to live on her own in the summerhouse in her parents’ garden. Everyone was surprised at her strange way of life but she told everyone that she wanted to suffer because that is what Jesus had to do and she wanted to be like him.

Rose converted some of the rooms in her parents’ home into a hospital, caring for children, those who were sick and the homeless. Because she was so helpful towards others, especially the Peruvians who were treated so badly by the Spanish, people liked her. Even today, in Peru, she is considered the first real social worker in that country.

Why is St Rose inspirational?

St Rose is an inspiration to us because she took on people’s suffering and offered a helping hand to those who were in need.

Rose was the first canonized saint of the Americas. She is the patron saint of florists, embroiderers and gardeners.

St Rose of Lima’s feast day is on the 23rd of August.