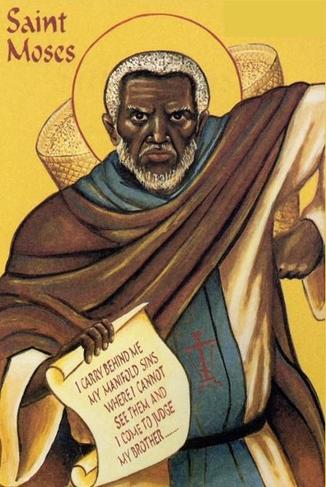 St Moses the Strong is the patron saint of our Africa Team.

Saint Moses the Strong lived during the fourth century in Egypt. In his youth, he was the slave of an important man, but after he committed a murder, his master sent him away, and he joined a band of robbers. Because of his bad character and great physical strength the robbers chose him as their leader. Moses and his band of thieves and did many bad things. People were afraid to even mention his name.

Moses spent several years leading a sinful life. One night, when he was trying to rob someone’s home, their barking dog stopped him from being able to do it. Moses planned to get his own back and so he went back to try again. As he swam the river towards the owner’s hut, the man was alerted again and so instead of robbing his home, he killed some of the man’s sheep. So he wouldn’t get caught, Moses ran away and took shelter with some monks in the desert.  While he was there, he was inspired by the dedication that the monks showed. So, he repented for his sins, left his band of robbers and went to one of the desert monasteries. When he got there, he was very upset and he wept for a long time. The monks were not convinced that Moses really wanted to say sorry, but Moses would not change his mind. He continued to ask that they accept him and they did.

Some time later, four robbers from the group that Moses was part of broke into his room at the monastery. As he was still very strong, he caught them all and tied them up. Throwing them over his shoulder, he brought them to Elders asking what he should do with them. The Elders ordered that they be set free. The robbers realised that Moses had been kind to them and so, inspired by him, they followed his example, repented and became monks themselves.

Moses became the spiritual leader of a group of brothers living in the desert. He also became a priest. When he was about 75 years old, the monks heard that a group of bandits was planning to attack them. The brothers wanted to defend themselves, but Moses would not allow it. He told them to find somewhere safe to go rather than fight back. Moses and seven of the brothers remained behind and rather than put up a fight, they greeted the invaders with open arms. Sadly, Moses and all seven brothers were killed by the bandits. They were martyrs.

What did he do to make him worthy of Sainthood?

He recognised that he had been doing wrong, asked for forgiveness and changed his life around. He became known as a man of peace, calling people to reconciliation and forgiveness.

He is often pictured holding a basket of sand. Why?  There was a time when one of the brothers did something wrong and  Moses was invited to a meeting to discuss an appropriate penance but Moses refused to attend. He was called to go to the meeting a second time and when he went, he took a basket of sand with him. Moses used the basket to help the brothers to understand that it was not right to be judging someone else when he had done so many bad things himself. The basket of sand was a reminder of all those bad things. When they heard what Moses had to say, all of the brothers forgave the monk for doing wrong.

Why is St Moses inspirational?

Moses can be an inspiration to us because he teaches us that we all make mistakes but we can put them right by asking for forgiveness.

Moses is the patron saint of Africa and non-violence.

St Moses the Strong’s feast day is on the 28th of August.